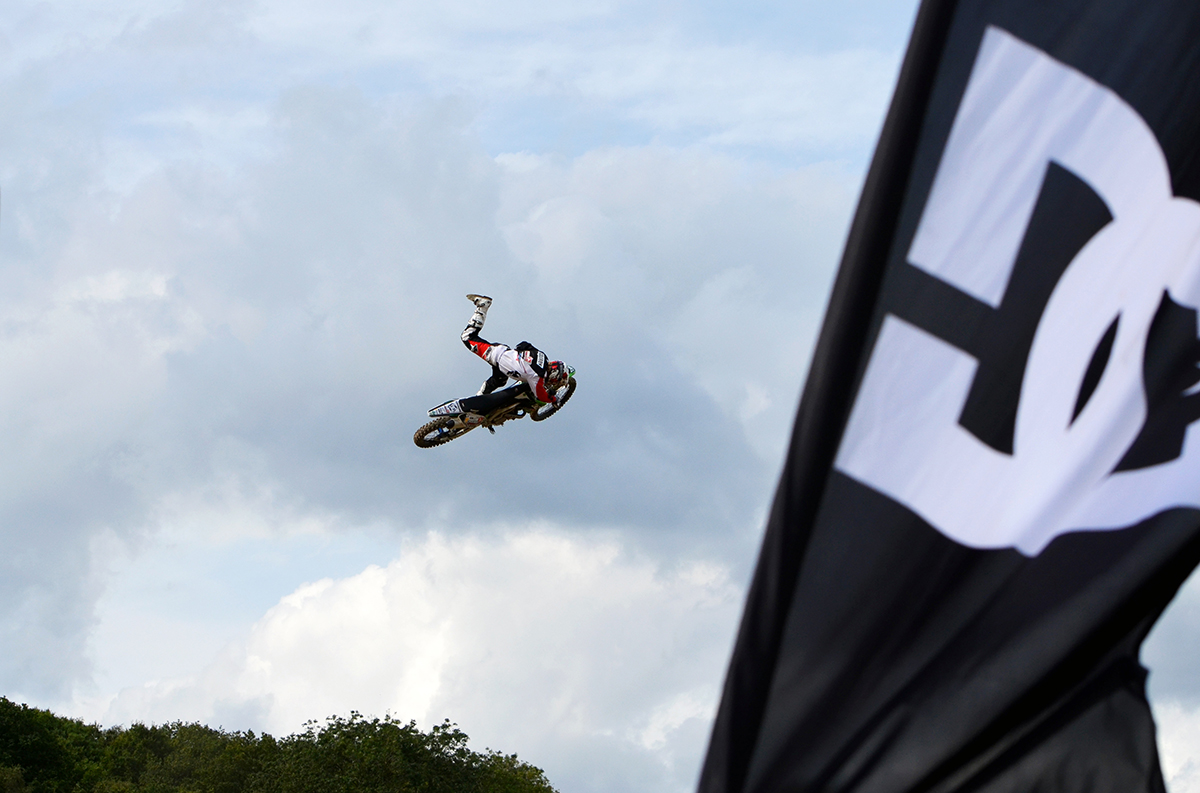 Located on a private farm just outside London, UK is the Scarry Compound. This backyard FMX park is owned by the Scarry family, and over the last few years has become the home of amateur freestyle motocross in England. On Saturday, the Scarry Compound would host the first round of a new UK Pro / Am FMX series – Dirt Junkies!

After a day of perfect conditions for practice on the Friday, with tacky dirt and no wind, riders woke up to a slippery, waterlogged FMX park on Saturday morning after a heavy rain the night before. A few hours of running-in lines, raking and sweeping, the course was ready to ride.

First up was the amateur qualifying sessions. Riders were put into groups of three, and sent out to jam around the FMX park for 20 mins in a fun and relaxed format. Riders were then ranked by the judges in reverse order ready for the finals later on in the day. For some of the amateurs, the Scarry Compound is their local park, but for many it was their first time riding the course. Everyone quickly managed to clear all the jumps, and figure out the different lines available in the park. 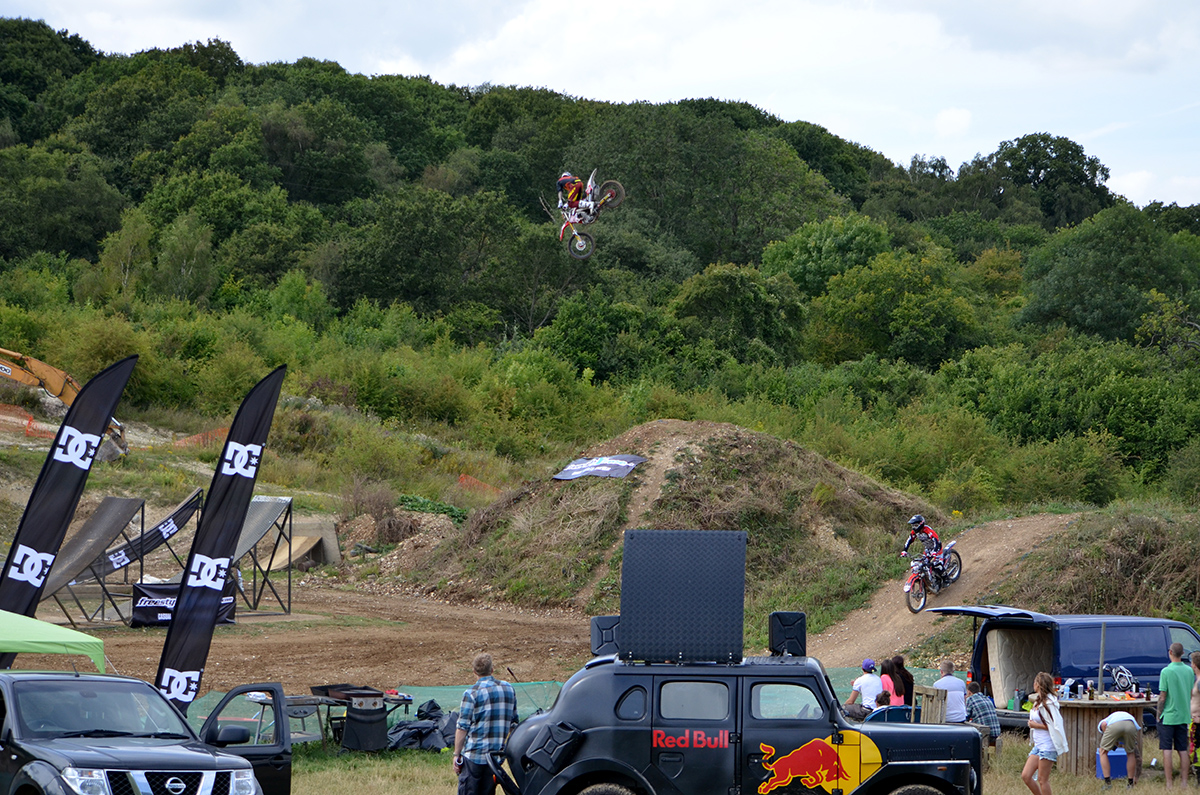 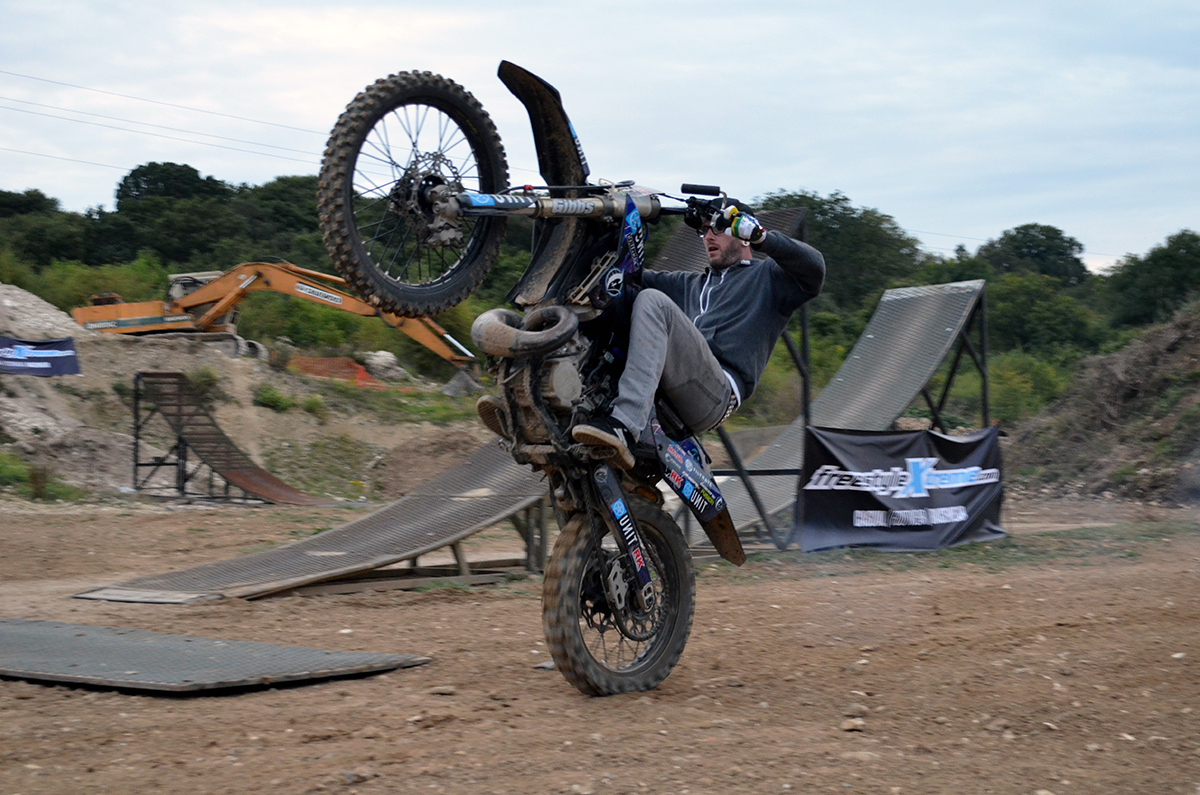 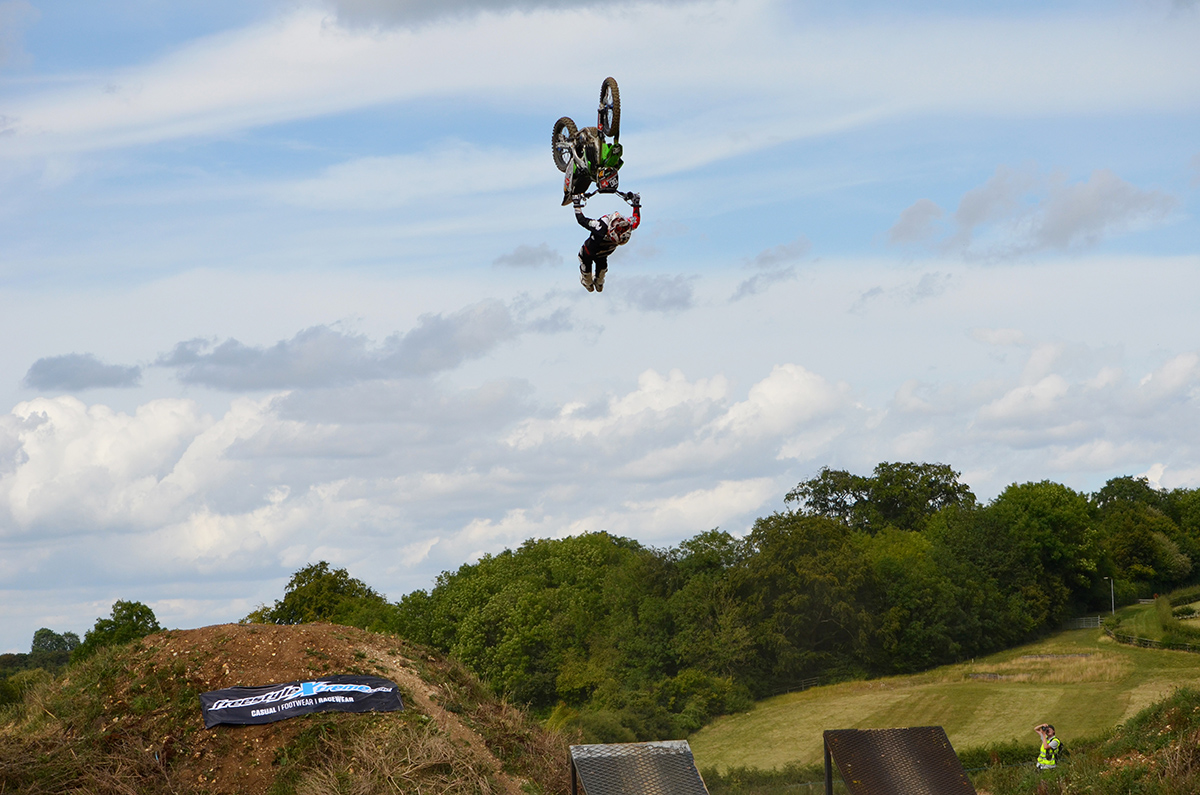 Next up was the Pro jam. A handful of the UK’s top FMX riders took to the course and threw down in a jam format for a good hour or so, taking it in turns to send the biggest tricks in their arsenal, and cope as best they could with the windy conditions. Dave Wiggins from Gatwick and Jamie Squibb from Devon really stood out; hitting the big gap, throwing some insane whips and a big selection of well extended tricks. Squibby, who only started Back Flipping again a year ago knocked out his entire repertoire of upside down tricks, as well as his newly mastered and super steezy Up Nacs. It’s fair to say Jamie has taken the level of FMX riding in the UK to a new stage this year, and it doesn’t look like he’s going to slow down any time soon.

After a short break for lunch it was time for the amateur finals. Each rider would take to the course, and put together a 90 second run showcasing their best tricks and choice of lines to try and impress the judges. The judging panel in question consisted of Matt Rebeaud (X-Fighters rider), Stu Macey (Injured UK Pro FMX rider), Jamie Squibb (UK’s top FMX rider) and Neil Hopkins (One Industries). All the riders made full use of the dirt hits, hips, step-ups and stoppie boxes as well as the regular 8m ramps, but it was London’s Joe Snazell who took the win ahead of Riccardo Underhill and Wayne Jacobs. 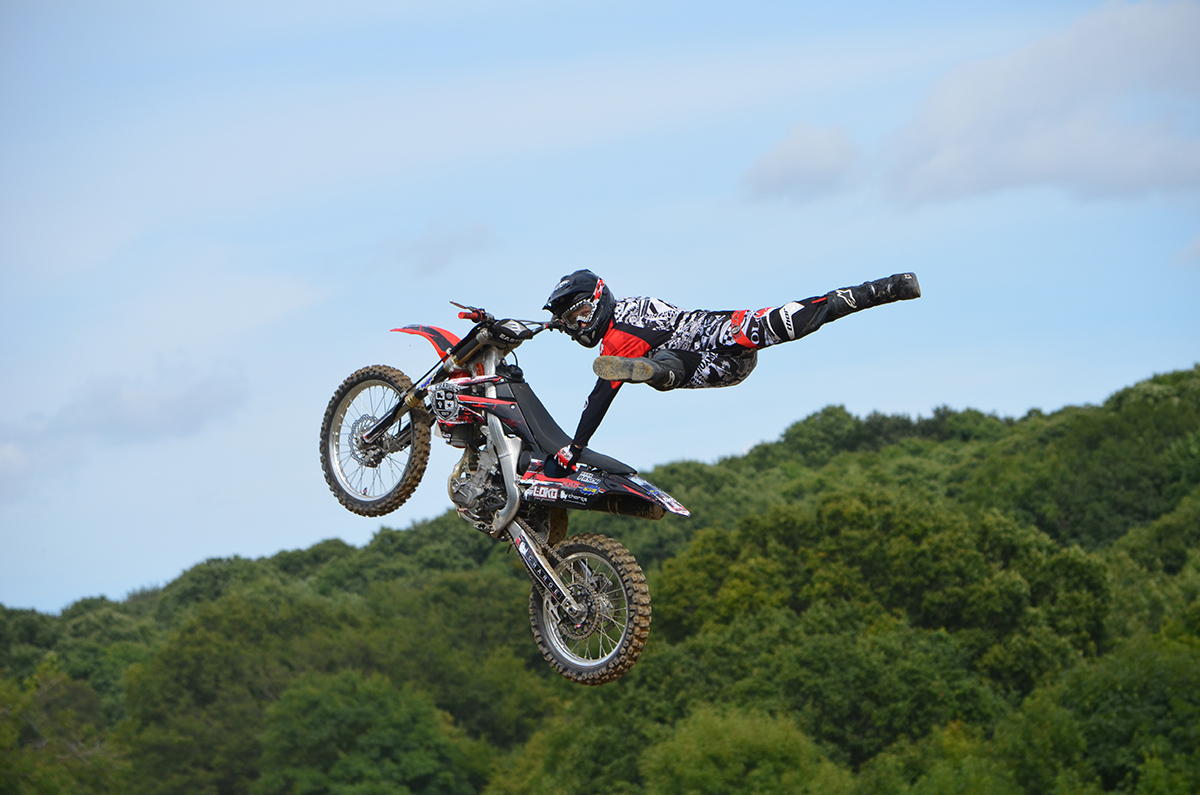 Once the finals were done and dusted the scores had to be tallied up. Not to let the energy drop whilst this was going on, a quick ‘Goon Riding’ contest spontaneously kicked off with a prize of £50 and a can of Strongbow cider presented by Freestyle Alex himself. With around 7 riders all gooning as hard as they could around the course at the same time, the only words to describe the scene would be sketchy as hell and truly hilarious! The Goon King of the day was local rider Frank Carlton AKA Filla, who displayed some serious hidden goon talent. 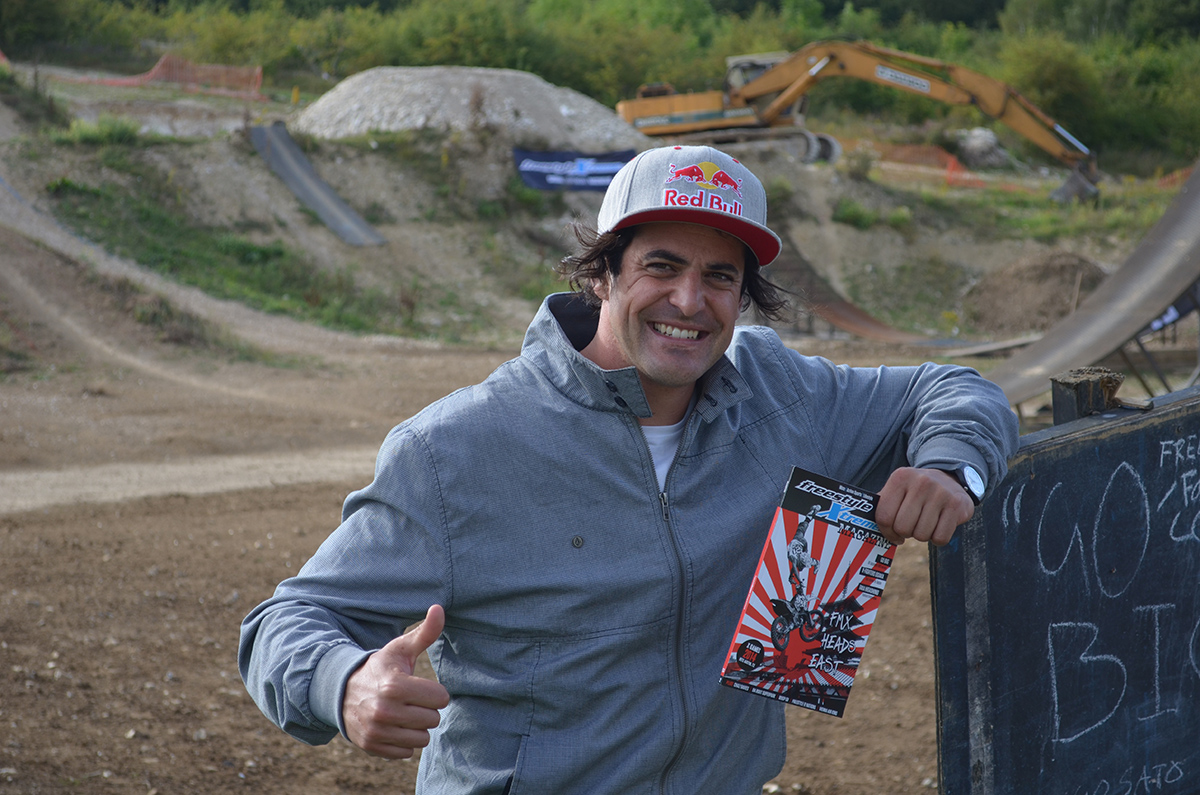 Red Bull’s Matt Rebeaud kindly presented the prizes, cash and trophies to the winners. Here’s what Matt had to say about the event;

“For me it was really cool to see what looked like a lot of friends just riding together and having fun, which is exactly the spirit of freestyle motocross, and definitely how it should be. I think for me I lost a bit of this when the competition side of things took over. It’s easy to become so focused on winning and training, you can forget about just riding with friends, so it was cool to see all the guys riding together and having so much fun today.” “Without amateur events like this we don’t have the sport, you know. Everyone needs a place to start. You can tell that in the finals all the guys were pushing their riding to the limits. It’s amazing how everyone had progressed a lot throughout the day.” 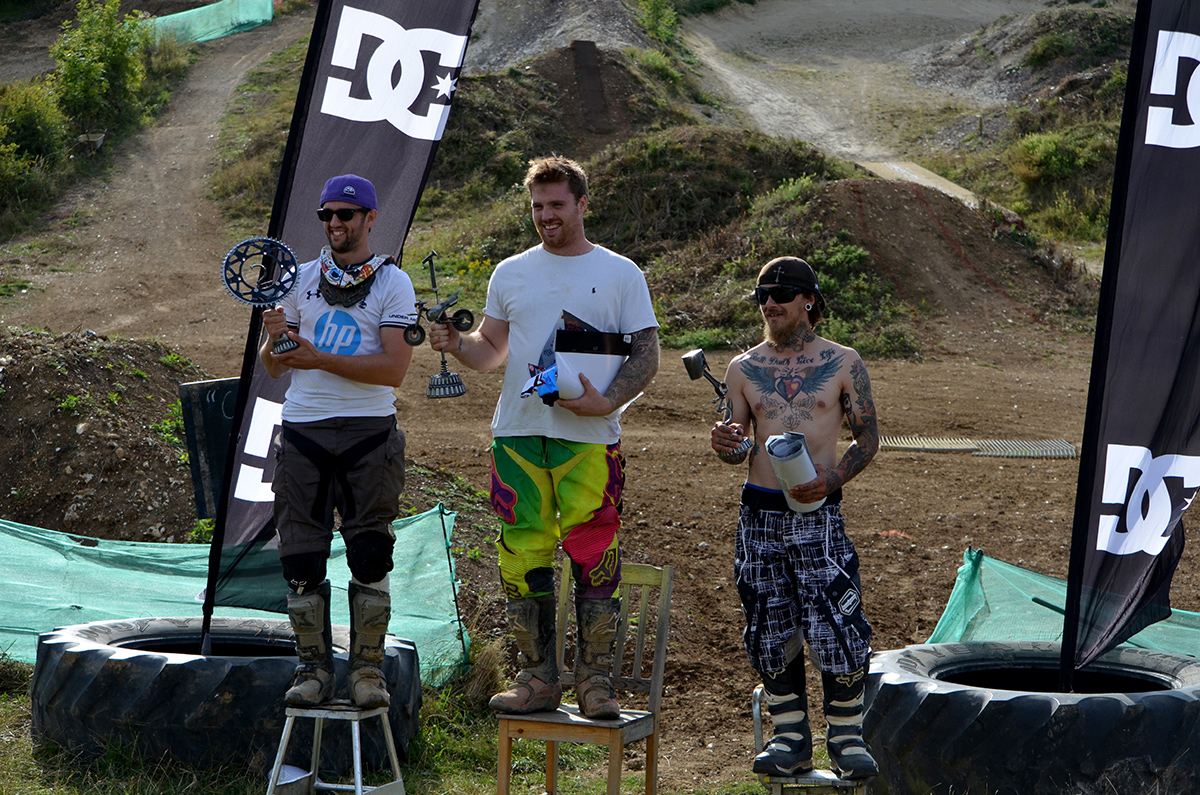